Often considered one of the city’s most overlooked neighbourhoods, the peaceful and verdant Plantage district provides an idyllic setting for an authentic Amsterdam adventure from one of our Plantage District apartments. This area is characterized by lush green spaces, a safe and laid back atmosphere, an incredibly rich history and a simply stunning array of worthwhile attractions. Wonderfully located towards the east of the vibrant central core, this attractive quarter grants respite from the jostling tourist crowds combined with close proximity to the vivacious nightlife square of Rembrandtplein and the capital’s notorious Red Light District.

During Amsterdam’s flourishing Golden Age of the 17th century, the need for accommodation became so apparent that the council elected to drain the unsavoury swamp lands surrounding the city to construct a new residential sector. The available plots were deemed too large and many remained unsold, prompting a new direction for the Plantage; a lush recreational area where affluent citizens could purchase allotments and gardens, and subsequently relax in this picturesque environment. The popularity of the Plantage rapidly increased over the ensuing centuries, and by the late 1900s became a neighbourhood synonymous with entertainment due to its high concentration of bars, dance halls and theatres. The atrocities of the Second World War permanently transformed this once care free region as German officers utilized one such jovial theatre as a prison for thousands of Jewish residents before their ultimate deportation to concentration camps.

Although encompassing a relatively small area, the Plantage District is seemingly bursting with a diverse selection of venues to add to the day’s itinerary, ranging from the ever popular and ancient Artis Zoo to the beautiful interior of the enlightening Rembrandt House Museum. The northern section that overlooks the rejuvenated waterfront is home to the instantly recognizable Nemo Science Centre, the Amsterdam Centre for Architecture (ARCAM), and the dramatically modernized and highly recommended National Maritime Museum. A short stroll east of this abundant setting will deposit you at the solitary restored windmill in central Amsterdam, De Gooyer, which accompanies an organic brewery and a rather delightful pub with outdoor terraces.

Further south lies the breathtaking Portuguese Synagogue and the fascinating Jewish Historical Museum, which border the capital’s premier flea market at the Waterlooplein. Visitors wishing to enhance their knowledge of the Plantage’s troublesome past should take a moment to observe the poignant and highly emotive memorial at the Hollandsche Schouwburg, dedicated to every single Dutch Jewish victim of the Second World War. Arguably the prettiest establishment in this already scenic quarter is the impressive Hortus Botanical Gardens, which originated in the 1600s as a medicinal herb garden for the city’s doctors and pharmacists. This beloved institution now boasts over 4,000 plant species, seven climate controlled greenhouses, and one of the most beautiful outdoor cafes in Amsterdam, the sublime Orangery.

If you require any further information or assistance, please do not hesitate to contact our friendly support team. They are available 24/7. 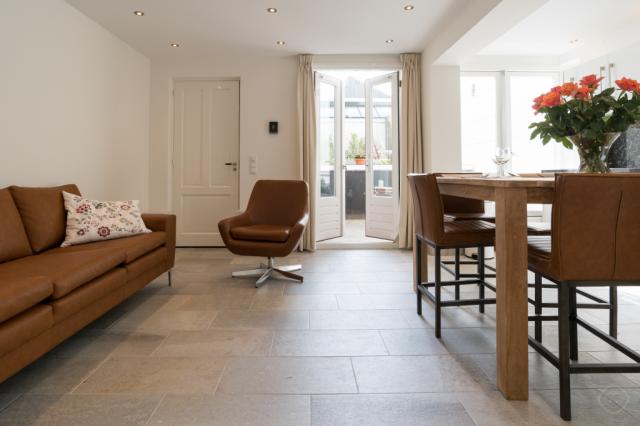 Stylish one bedroom accomodation with a cozy living room and a lovely patio, housing up to two guests within metres of Artis Zoo in Amsterdam’s peaceful Plantage Quarter.
More about: Artis Plantage apartment Amsterdam

Show all apartments in the Plantage District area