Occupying a relaxed setting south of the city centre and its accompanying canal belt, the Museum Square or Museumplein as it is commonly known, radiates a sophisticated air that coincides with its prestigious status as the cultural heart of Amsterdam. The perfect locale for art lovers or those desiring a more tranquil environment than the congested central core, the Museum Square and its vicinity makes the ultimate base for an authentic and enriching adventure. As the name suggests, this attractive area houses the three most important museums in the capital, separated by an extensive grassy expanse that hosts public events throughout the year. We offer a vast range of Museum Square apartments for your short stay in Amsterdam.

Established towards the close of the 19th century as a replacement for the preceding Brewer’s plaza, the Museum Square received a dramatic renovation in 1999, which implemented an underground parking system and supermarket and injected a much required modern aesthetic into the surroundings.

Due to its prominence as the largest open area in Amsterdam, the Museum Square is often commissioned as an arena for mass public gatherings on such festive occasions as Queen’s Day, during international football events, and Uitmarkt, a happening to promote the launch of the cultural season. As the temperatures drop and winter ensues, a temporary ice rink is erected to delight visitors, creating a picturesque scene with the backdrop of the immense Rijksmuseum. Indeed, this masterpiece of architecture and splendour is a sight to behold, often considered one of the most beautiful museums in the world, which marks the entrance to this enchanting neighbourhood. Displaying an exceptional collection of over a million objects, including the celebrated Masterpieces anthology, an integral and compelling exhibition that alone attracts over one million admirers annually, the Rijksmuseum makes the perfect introduction to Dutch art.

The remaining two venues from the trio of chief museums include the ever popular Van Gogh, which contains the world’s largest compilation of his works, and the Stedelijk, heralded as one of the most innovative modern art museums in existence today. The square is also home to the Amsterdam Diamond Museum and the majestic Concertgebouw, internationally renowned for its breathtaking acoustics and the ultimate setting for an evening of spectacular entertainment. After an overdose of culture, the nearby shopping streets provide essential retail therapy, headed by the chic P.C. Hooftstraat, arguably the most exclusive avenue in the capital. The Museum Square is also conveniently close to Amsterdam’s premier natural space, the beloved Vondelpark, offering a picturesque alternative for the day’s itinerary. With instant access to so many rewarding attractions, a peaceful atmosphere and an attractive location, the Museum Square grants a wonderful base for a memorable Amsterdam adventure.

If you require any further information or assistance, please do not hesitate to contact our friendly support team. They are at your service 24/7. 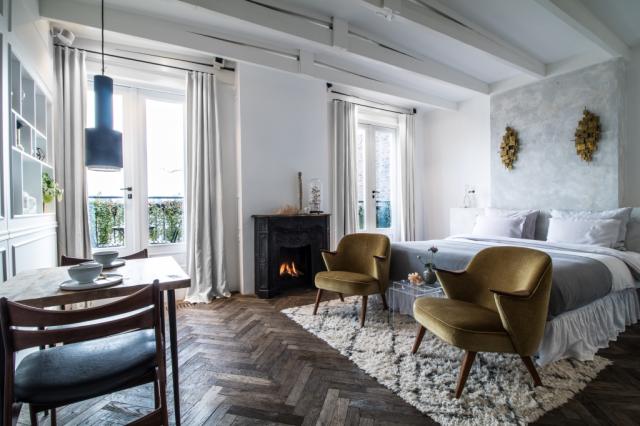 Show all apartments near the Museum Square