The Leidse Square, or Leidseplein as it is locally known, is one of Amsterdam’s primary entertainment plazas, located on the southern tip of the beautiful canal belt, conveniently situated close to the city’s premier park and the cultural quarter of Museum Square. Inundated day and night with hordes of visitors seeking a suitable establishment in which to quench their thirst, appetite, dancing desires or retail requirements, the Leidse Square is constantly animated throughout the seasons. We offer many Leidse Square apartments for those people who enjoy to be in the middle of this dynamic area!

This bustling plaza once marked the entrance to the road to Leiden, hence the name, utilised for many years as a parking space for the carts and carriages belonging to farmers and business travellers seeking admission to the city. In 1875, the Leidse Square became the starting point for the earliest horse drawn tram line, and just twenty five years later provided the initial locale for the first electric tram. The plaza has retained its status as a central transportation hub, offering a range of transport methods including buses, trams, taxis and bicycles to enable direct access to any desired destination.

Saturated with an eclectic array of establishments, the Leidse Square caters to every discernible taste with a high concentration of restaurants, nightclubs, coffeeshops, cinemas and stores, in addition to countless terraces that simmer with life during the warm summer months. Even during the winter, this dynamic setting preserves its lively reputation, charming the crowds with temporary ice rinks and delightful stalls serving traditional festive delicacies. Restaurants and eateries are truly in abundance in this area, ranging from the famous art deco Cafe Americain to cheerful late night venues such as Bojo, which boasts a delectable Indonesian menu and a superb atmosphere. Choices for the evening’s entertainment are equally as vast and include improvised comedy at Boom Chicago, customary merriment and joviality at the resident Irish pubs, exclusivity at the capital’s most fashionable nightclub, Jimmy Woo, and gifted performances at the impressive Stadsschouwburg or Municipal Theatre.

Amsterdam’s two principal live music venues are also within the Leidse Square area, the Melkweg and Paradiso. Both clubs showcase a fantastic spectrum of musical talent from up and coming local musicians to global sensations, each boasting an unrivalled atmosphere in an incredibly intimate environment. Aside from the obvious nightlife draw, this location is also well suited to visitors seeking a central base that grants instant access to the enlightening Museum Quarter and the beautiful natural expanse of the Vondelpark, a popular yet relaxing sanctuary that provides respite from the congestion and an idyllic spot for a sociable summer picnic.

Below you will find our most popular Leidse Square apartments and a link to all apartments near the Leidse Square. If you require any further information or assistance, please do not hesitate to contact our support team. 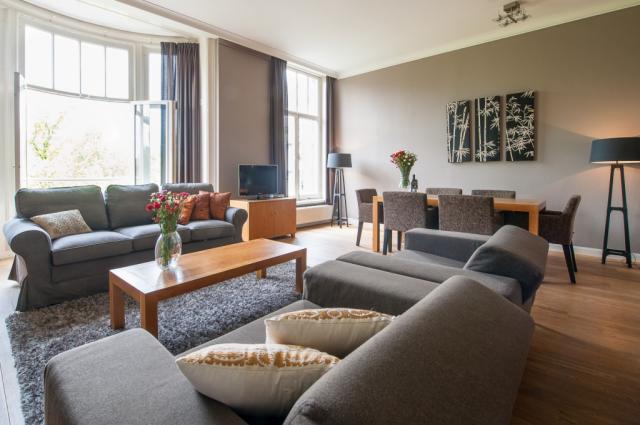 A beautiful modern two bedroom apartment; sleeps six people max. and located on the popular Leidseplein amongst many restaurants, bars and shops and close to Vondelpark and Museumplein.
More about: Leidseplein Presidential 1 Apartment Amsterdam

Show all apartments near Leidse Square